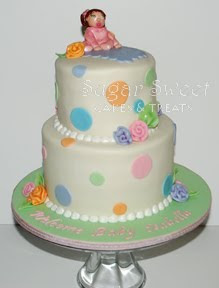 A small, baby shower cake decorated in polka dots, ribbon roses and a baby girl for a friend’s co-worker. She had given me a picture of a cake that she wanted which happened to be from the locally famous, Cinderella Cakes. She wanted it to be pretty much the same except for the baby to be sitting, with green eyes, and a side pony tail of brown hair…plus, a binky in its mouth. I modeled the sitting baby after a photo of my daughter when she was barely able to sit using her arms to help hold her body up. The face was a challenge! 3 hours and 3 faces later, I finally had one I was happy with. After trying the make the face a 2nd time, I finally pulled up in front of the computer, and looked over some of Lorraine McKay's figures and alas, I had a face…why did I not do this, 2 hours ago! Her figures are remarkably beautiful and a true inspiration. 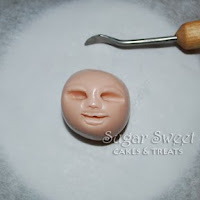 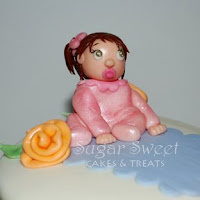 Here is face #1, at least the start of it, by the time I got the eyes in and the hair, it didn’t go well with what I was trying to do. Face #2 (no picture) was just way too simple and cartoon-looking. Face #3, perfect!
For the roses, I used a video posted by Rouvelee Ilagan to help figure out how to make them. Although I didn’t have a pasta roller, I used my rolling pin to roll the fondant out as thin as possible, folded the top half over then rolled up the roses. I also cut up some leaves free hand, pinched in the bottom half and lay them over an empty paper towel tube covered in parchment paper to dry them with a slight curve. I then dusted them with a little bit of petal dust and steamed them to set. These roses were pretty simple, fast, and fun to do.
The cakes were small, a 6” and 4” round: Vanilla-lemon cake with lemon mousse filling and lemon buttercream. They were then covered in MMF. The white polka dot border and lettering were piped with royal icing....Welcome Baby Isabella!

Posted by SugarSweet at 9:15 PM