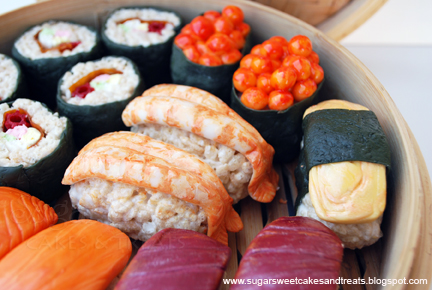 Sushi anyone?  I love sushi and I'm was so glad that we got to eat real sushi after making these - got my sushi craving satisfied...at least for the moment!

It was the night before my father-in-laws birthday and my husband and I were talking about what I should make.  For the past 3 years, I had created a tennis themed cake (Tennis Racket, Tennis Court, and last year, a Tennis Shoe) and although I had originally planned on making another tennis themed cake, I really didn't feel like it.  We were going to a sushi restaurant the following evening to celebrate his birthday and my husband thought it would be really nice to surprise him with a sushi cake or cupcakes instead.  It was late in the evening and we just had one of the hottest days of the year and baking, was not one of those things I wanted to do in the midst of the heat.  And I thought (a light bulb moment), why not make them out of rice krispie treats (RKT), they're his favorite anyways.

I quickly gathered up all the stuff and stayed up late making these.  Big pat on the back for creating such a neat treat at a short notice in the middle of the night with no planning, baking or prepping for - whoo hoo - SCORE!  And dishes...aside from the bowl and spatula used to make the rice krispie treats, my sink was empty and not an aftermath of a mess in the kitchen to clean up (well, a tiny mess on the dinning table where I worked on these) - I LOVED it!  I am one of those that really hates the clean up part of cake-ing and would rather decorate more than anything.  And when each cake averages 15 hours to make plus weeks upon hours worth of design and planning, it was such a nice change to be able to make something that didn't take much thought and planning for.

The first thing I made were the cut rolls.  I made them like your would normally make a regular roll of sushi but instead of using rice, I used rice krispie treats and stuffed the inside with red vines, marshmallow ropes and some homemade mango fruit rollups (pretty much I grabbed what I had on hand that would work).  Rolled it up tightly using a sushi mat then cup them up into 1 inch circles.

To make the Nori (seaweed wrapper), I took a crumbled piece of foil and stamped it along a thinly rolled out piece of dark green fondant (the little square at the top of the photo is an actual piece of nori that I used for reference and later ate up...umm umm good).

I've made some sushi before at home and there are a couple websites that show you how. I used the same technique to make these:  It works just the same as if making them with rice.  Be sure to keep your hands greased up with a little bit of shortening to keep the RKT from sticking to them. 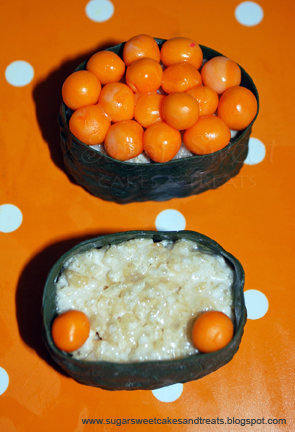 Here are the Ikura (Salmon Egg) Sushi.  I rolled out little balls of orange fondant and painted them with piping gel thinned out with vodka.  I layered on colors of yellow, orange, red and white to give them a shinny, almost transparent, appearance.

For the shrimp, I hand sculpted them out of white fondant, scored it a bit then painted it over with a mixture of piping gel thinned out with vodka in layers of yellow, white, orange, and red.  I kept going over it in layers and layers of colored piping gel to build up the texture found on shrimp.  They were then laid over the RKT (I used a little bit of piping gel under the pieces to help them stick a little to the RKT).

I did the same thing with each of the other sushi pieces:  hand molding them, scoring them, painting them over in a variation of gel colors and piping gel thinned out with vodka.


To make the Tamago Sushi (egg custard), I rolled out the fondant just like you would make the real thing then painted in some highlights with egg yellow and white gel colors. 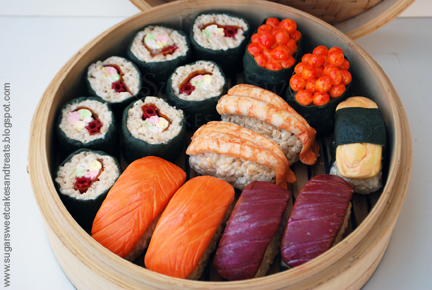 Once I had everything made, I didn't know what to use to display it on.  It would have been really nice to make a bento box but there was no time.  As I dug around the house, I spotted a bamboo steamer basket - it worked!  It also had a nice lid to hide the sweet goodies from everyone =D

And again, I'm craving for some sushi... 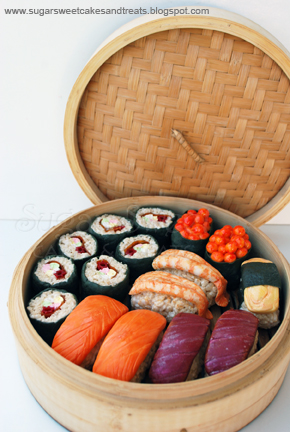 Posted by SugarSweet at 3:16 PM

Thank you so much for this fantastic idea. It came at a perfect time. I made a couple of the sushi items from your tutorial, what fun and they were loved by all here. Thanks again. craftbaker

Awesome =D so glad to hear they turned out wonderfully craftbaker. Thank you for sharing =)

Love these!! Super creative and the shrimp and fish look so real!! I can't believe you did this in one night?? And still got some sleep.