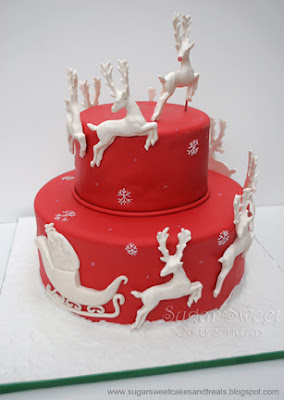 The Orange County Interfaith Shelter was holding their annual Christmas Luncheon and asked the Sweet Arts Cake Club for some cakes to be donated as table centerpieces which would be auctioned as a fundraiser.  This is the cake I made for them.  I sketched up the design back 2 months ago in October and just waited, and waited, and waited to get started on it.  Usually, I make all my decorations by hand using pictures as guides and inspiration but I was so lucky that at our cake club meeting last month, one of the ladies was selling gumpaste decorations and she had a few of these reindeer's - I was so excited since they're were so perfect and exactly what I needed for the cake!  No need to hand-cut them!  I later asked her where she had purchased them but unfortunately, she had bought a case of these a while back from a cake supply store that has since closed.  I have scoured the internet looking for at least a similar mold but have not been able to find them...please let me know if you see them. 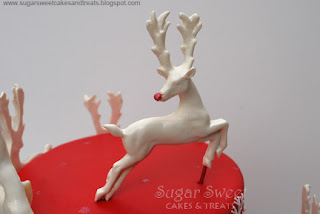 June 2011 Update:  A friend found a reindeer on Fancy Flours and they're the closest thus far.

December 2011 Update:  I've recreated the Sleigh and made silicone molds of both the Sleigh and Reindeer - both available for purchase now.  See tab above named, "Shop Sugar Sweet"

The cakes are a 10-inch and 6-inch White Almond Cake with Chocolate Hazelnut Buttercream (Nutella).  Covered in MMF made red with Candy Melts (about 1/3 cup melted), about a 1/4 teaspoon of Americolor Super Red, 3 drops of Americolor Maroon, and about 1/4 teaspoon of Chef Master Pink (I just squirted these straight into the melted MMF so they're approximate measurements) - I didn't want the cake to be a bold red but rather more of a cranberry red with a slight pink shade to it.  For the complete recipe and instructions on how to make MMF, please see my previous 2 blog posts:
1)  Recipe: Marshmallow Fondant (MMF)
2)  Recipe: Red Marshmallow Fondant (MMF) 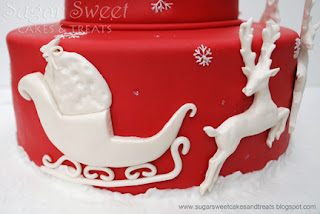 The sleigh was hand cut out of MMF (mixed with Tylose for instant gumpaste) and painted with pearl dust to match the pearly reindeer. 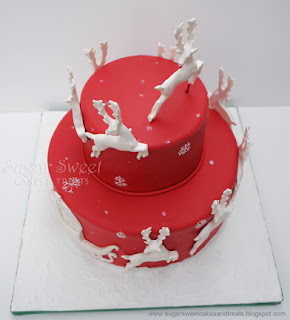 I used piping gel to attach the reindeer up against the cake.  9 total reindeer's and off course, I had to add the red nose with a tiny ball of MMF dusted in pearl dust for Rudolf.  For the reindeer that floated higher off the cake, I used Royal Icing to attach sticks of spaghetti to the back of the bodies then inserted those into the cake for added support (I usually make cakes for kids and avoid using toothpicks).  I did have to use toothpicks behind both of Rudolf's feet since he was free-standing and needed more support (you can see one behind his front paw that I painted red to blend in with the cake). 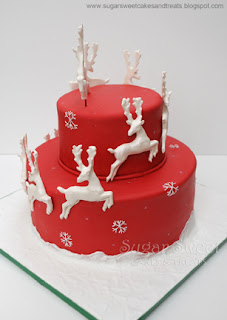 The board was covered in Royal Icing and I used a small trowel to texture it to look like snow that also went up the sides of the bottom tier.  Snowflakes were piped with Royal Icing then dusting of edible disco dust.  I also added small dots of the disco dust mixed with some diluted piping gel randomly around the cake for more sparkle.

I absolutely love how the cake turned out - so simple yet elegant and all for a good cause.
Posted by SugarSweet at 7:39 AM

so beautiful it makes me believe in santa again!

Oh my! what a beautiful cake !

I did a google search for cake decorators and yours came up in the top 50 blogs. I'm so glad I found your site! I'm getting lots of great ideas and I love how you added your recipe on how you made the red coloring for the cake. Color is everything.

Love your blog and your cakes are amazing !

Thank you for the lovely comments and happy holidays too!

Just beautiful - so different to the *everyday* christmas cake with a piece of holly plonked on top.............. again, its beautiful

This is a wonderful cake and I love your blog. I hope you can make the mold so we can purchase it.(I follow the CC thread)1 :-)