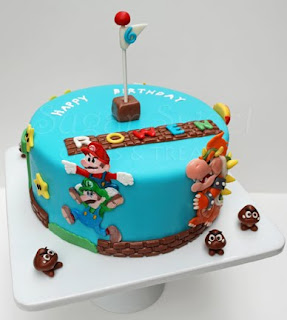 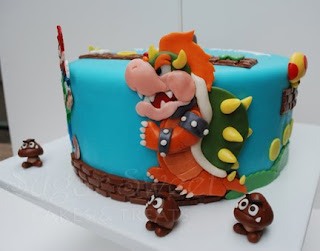 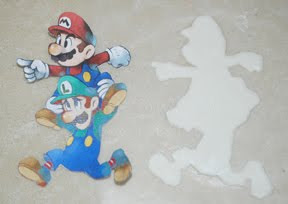 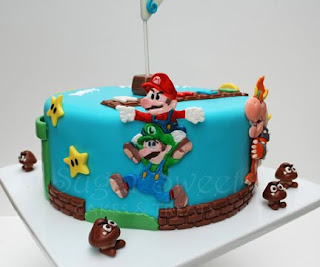 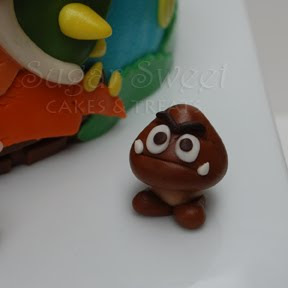 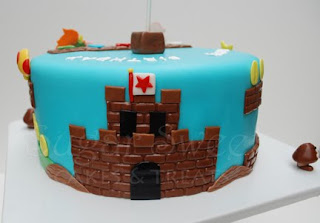 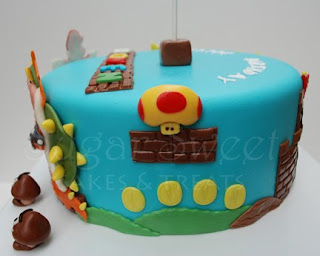 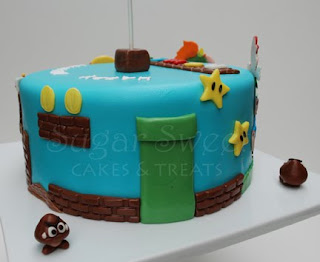 This cake is amazing!!! :) Alot of work but great!! You do an amazing job on the characters!!

Thanks Tanisha! Yeah, I do love recreating characters, they're so much fun to make.

I have a question for you, i'd love to try and make the filling for this cake, so is it just IMBC with crushed OREOs in it? Or how is it made? It sounds very delish and i'd love to make it for my son's b-day which is around the corner. Thanks.

I added the Oreo IMBC recipe to the bottom of the post. I just eye the amount of oreo cookies. For this particular cake, an 8" round, I used 1/4 bag of Oreo Cookies.

Do you paint fondant with regular gel colors mixed with alcohol?

Yes, I paint with gel colors mixed with either almond extract, lemon extract or Vodka. As long as what your'e using dries dry, you can use it to paint with - just don't use water, it dries sticky/tacky. You can also paint with straight gel colors but I find it easier to thin them out a bit first.

hi i love your cakes and i'm new in decorating cakes i would like to know what is IMBC please i really apresiate it. thank you

Hi Monica, IMBC is Italian Meringue Buttercream. It's made with egg whites, sugar and butter. Very light and not too sweet.

Hi Monica could you tell me how much of everything we need to try your IMBC recipe I would love to try it thanks Martha my email is mvfranco2317@hotmail.com

@ Martha - here is the link to where the IMBC recipe can be found:
http://sugarsweetcakesandtreats.blogspot.com/2010/06/music-themed-80th-birthday-cake.html

How did you make the little goombas???

They're like a mushroom. I rolled out their heads into a hershey kiss shape, added the eyes and eyebrows with fondant, slit their mouth using the edge of a piping tip and added little teeth to it. For the body, rolled out a short cylinder in a lighter color and for the feet, made 2 rounded ovals and flatten half of it to stick under the cylinder. Used piping gel to get everything to glue together. HTH.

LOL Amazing Cake and high five for the coupomn!!

Great work! I have to make a Mario Brothers cake and want to try the 2D type technique. Do you make them ahead of time or right before you are ready for them to go on the cake? I was worried that it would be hard to put the figures on a round cake if I pre-make them.

It depends on the timing. If you do make them ahead of time and want them to remain soft and pliable, store the letters over a piece of parchment or wax paper and slide them into either a sheet protector or a zip lock bag and keep them flat in the freezer. When you're ready to use them, pull them out and pop them on the cake, they'll feel just like they did when you made them - works like a charm!

I love this! I generally spend days sculpting figures for my kids' cakes but decided to consider flat cut outs to save some time. I think I'll be stealing your bowser method!! Thanks for sharing!

do you happen to know if fondant and modeling chocolate is a good idea to decorate a ice cream cake?

I make cakes as a hobby and my friends and family have been keeping me plenty busy =D. I've done 1 Lego Star Wars cake for my son a few years ago when I had first started decorating cakes: http://www.flickr.com/photos/sugarsweetcakes/5190300784/in/photostream

I'm not sure - never tried it. Sorry I couldn't be of any help here.