Where have I been?  It's been a long while since I last posted anything but I've been so busy and have been staying away from cake stuff for the past couple of months to just get caught up with life and everything going on with it.  At least for now, I'm back and I've been missing it for way too long. 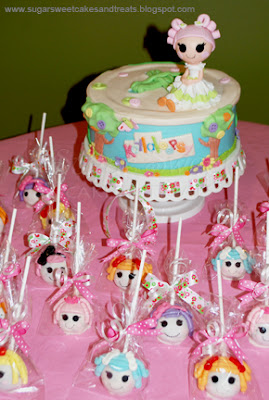 Do you know a Lalaloopsy?  Hah-hah, I have gotten to know these dolls really well over the past few weeks.  They are everywhere and all the little girls are talking about them and collecting the dolls!  Even my 4 year old has a long list of the ones she wants!

This cake was made for my 9 year old niece Kayla who had a garden themed Lalaloopsy party this past Sunday.  And she has over a dozen of them in her collection.  It was so cute seeing her name each of the cake pops and getting excited with each one =) 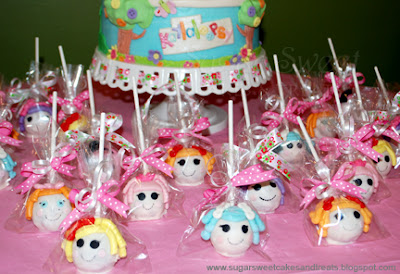 I must admit, these little gals, after all the trouble I ran into creating them, turned out super cute =)

I've never been a big fan of cake pops.  They're mashed up cake that is just too sweet with the chocolate coating for my taste but the kids go crazy over them and they never last long at any party.  So, determined to make a cake pop that I could enjoy eating too, I bought the Nordic Ware Cake Pops Pan.  LOVE IT!  I want go buy a few more of these.  One pan is not enough.

And, one of my gifts from my cousin and her husband (they just got married a little over a week ago), were 2 sets of the Silicone Cake Pop Trays.  They didn't work that great (sorry Steph and Sean) but I'm gonna give them another try with other recipes before I give up on them - And, I'll be sharing with you all about their wonderful wedding and the cake I made for them really soon too.

I tried using a scratch chocolate cake recipe to make the balls but the batter doesn't rise much and I ended up with ovals that we gobbled up right off the pan as they were cooling - it was too easy to just pop one of these things in your mouth...and another...and yet another...well, they didn't last long.

(I also had made some banana bread and had a little bit of batter left over from the loaf pan and made some cake balls with them and wow, those were gone fast!)

So, for the Cake Pops, I made them using a box mix, sub milk for water, and add an extra egg - read it on a couple places on the web that suggested it with using cake ball pans.  The result....

But my troubles didn't end there.  Dipping cake into chocolate was a disaster at first.  I just couldn't get the Wilton Candy Melts to work right so I ended up using Vanilla Almond Bark

added to it to make them look closer to the same color as the dolls.

Then, on top of that, the cake just wouldn't stay on the stick when I tried to dip it into the chocolate.  The weight of the chocolate just tore the soft cake right off the stick!  The cakes were chilled cold but it didn't matter.  So basically, I had to dip the cake ball into the chocolate and let it sit still while I spooned the chocolate up and around the pop and with the same spoon, I scooped the pop straight up to lightly twirl and tap off the excess on the side of the bowl.  I then let them sit over a piece of parchment paper using an egg carton to hold the sticks up at an angle. 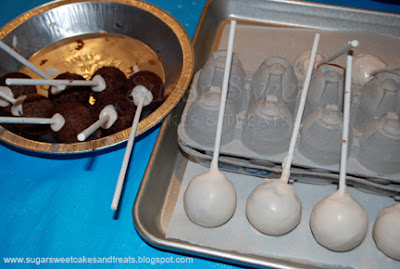 Originally I wanted the sticks to be on the bottom of the cake pop so that I could stick them into a block but the cake just wouldn't sit straight and it just wanted to break and fall apart - errrr!  Frustration upon frustration but with a little improvising, they actually turned out cute laying off to the side.  I am not a cake ball/pop maker and I bow down to you all that make these often.  With some practice, just maybe, I'll get it down right.

And to the decorating part.  I tried making the doll hair by piping chocolate but it just didn't look right.  I wanted their hair to look like THEIR hair as close as possible.  So I tried to pipe royal icing in layers but that was worse so, in the end, I tossed out the piping bags (I don't like piping much anyways) and pulled out the MMF and did what I was most comfortable with...decorating with fondant.  I love how they turned out!  Although each doll took an average of 20 minutes to decorate, it was worth it in the end.

How to:  Roll out the MMF into a long rope, slice it up in varying lengths, lightly score each piece a couple times then with piping gel, glue them onto the cake pop.  Piping gel sticks really well to chocolate - water won't work.

By the time I finished decorating and bagging the 20 cake pops, it was 4:00 a.m. and I still had the cake to cover and decorate.  So, this is the only photo I remembered to take but at least it shows you the basic structure of the cake topper.

The head of the topper is mashed up cake and about 1-3/4 inches across.  It was then covered over in a 50/50 mix of modeling chocolate and MMF.  Her clothing was built in layers of ruffles with gumpaste since by the time I started making her, the sun had already come up, the birds were chirping outside and the party was about to start in a few hours - I needed it to dry fast.

And here she is all completed... 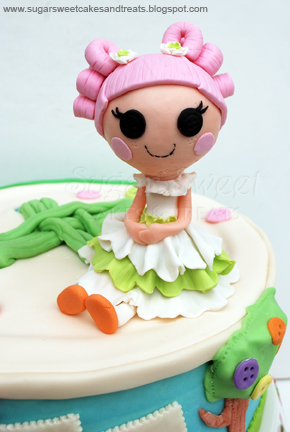 And the trees are stuffed with marshmallows to make them look puffy. 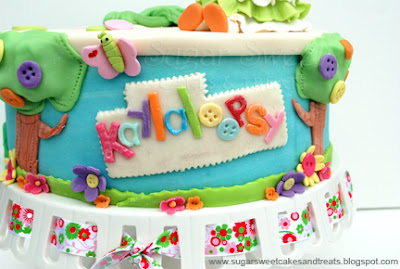 I also incorporated her name into the label - hah-hah!  My daughter now wants the same theme for her 5th birthday next month (there goes the girlie pirate theme out the door).  But, I'm looking forward to making these again.

And I did get some sleep that morning...all 2 hours worth =)  My sister-in-law did make me one of her delicious cups of coffee that helped me get through the day.  The things we go through to make cake I tell ya!  But seeing the joy in the kids faces and their eyes light up is so worth it. 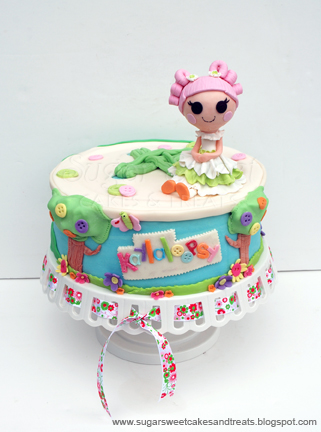 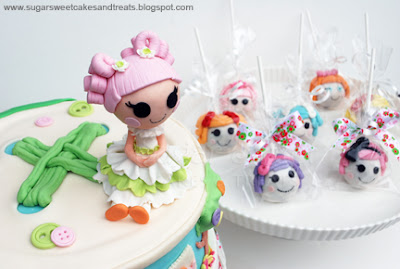 Posted by SugarSweet at 1:02 AM

Oh MY Gosh!! LOVE LOVE LOVE!!! My daughter would go nuts for this cake! This is awesome. I've wanted to make the girls as cake pops but they look so complex, your description of them is great. I may give this a try.
I've pinned them as well!

How much fondant (lbs?) did you use for how many cake pops in the end? Thanks!

It doesn't take much to decorate the dolls faces with - it's hard to guess how much I used since I make batches of fondant and use it to cover cakes with too. Maybe around 1/4 lb per dozen?

OMG!!! I’m so glad I found you on pinterest. Your a lifesaver!!! I’m doing this cake and the pops this Saturday, and I didn’t even know where to start thank you so much for this tutorial.

Thank You, My daughter is going to love me! I better start practicing now though:)

Really neat. Looked at a lot of sights. Appreciate that you gave tips and what worked. I prefer buttercream for taste, but want accuracy and "dolls". Will have to try, then if I don't like will just do mini loopsy dolls. Thanks again.

Wow...... Super cute! Thank you so much for this posting. I'm going to try these soon since my daughter is turning 4 in April and she is crazy about these dolls........ How do you make the bows for the hair??

I used a mold that I made a while back for some Hello Kitty cupcake toppers: http://sugarsweetcakesandtreats.blogspot.com/2011/01/hello-kitty-cupcake-decorations-and.html

They came out so beautiful!

Do you make them for sale as well? I'd love to order some from you. Please let me know.

Send me an email (sugarsweetcakesandtreats@gmail.com. I can ship cake or cupcake decorations but haven't shipped actual cake pops yet.

Ok how did u do the eyes omg

it's described up in the post. I used piping tips to cut them out.

wow stunning cake and a really welldone effort to share it with us,i really appriciate people who share their tallent to others.thank you for you time and effort to put this tutorial in the website,i really enjoy reading it...:))

Thanks bonny. I made the bows using a mold I designed for some Hello Kitty Decorations as seen here: http://sugarsweetcakesandtreats.blogspot.com/search/label/Hello%20Kitty