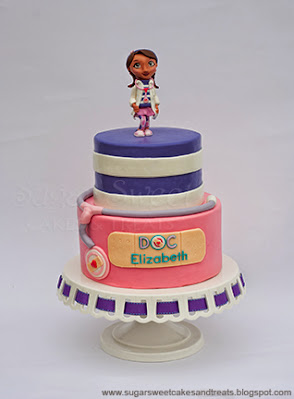 Here is the cake I made for my daughters best friend with some photos on how I made the Doc McStuffins figurine using a Tootsie Pop.  She's decorated mostly out of gumpaste and her clothing is a mix of gumpaste and fondant. 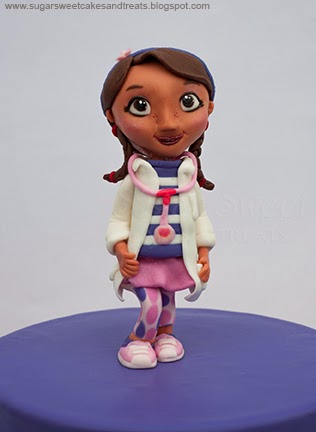 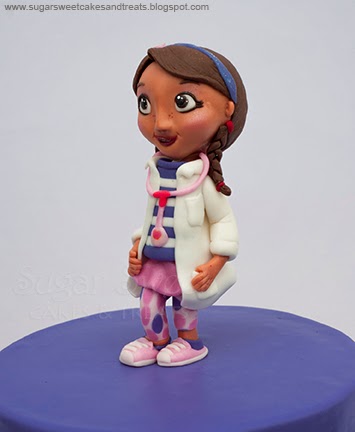 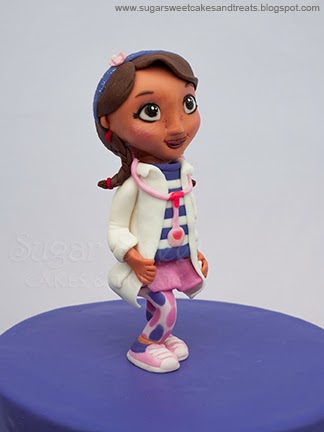 I've been playing around with different ways to make faces and this has been my favorite technique thus far - I also used it on the Strawberry Shortcake Figurines I made a few weeks ago too.  Here are some step by step photos that I was able to capture.... 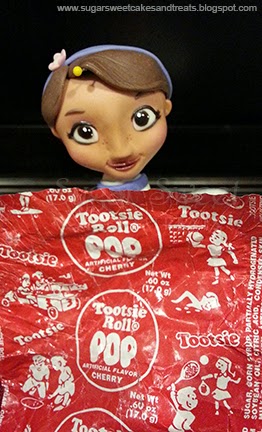 I was digging through my pantry looking for something to use for the inside of Doc McStuffins head.  I've used Styrofoam balls before but kids, no matter how often you tell them not to bite into the head and that it's not edible, still manage to sneak in that bite.  I've also used rice crispy treats before but it was after midnight and I really didn't want to go through making a tiny batch just for the head.  So alas, I found this tootsie roll pop in our candy stash, and it was the perfect size!  Now the head is entirely edible except for the popsicle stick inside it - ha hah!

Step #1: Cover the Tootsie Roll Pop with fondant and sculpt it into a round ball.  Then, add the features - forehead, nose, cheeks, and chin.

Step #2:  Cover the lollipop with a piece of skin-toned fondant, smooth out the seams along the back of the head (the hair will hide it) and sculpt in the features of the face.

Next Steps:  Define the nose, add the eyes, lips, and hair. Use a toothpick to paint on the freckles and dust the cheeks and eyelids with pink luster dust.

Since this figurine needed to be 5 inches tall, I had to add another popsicle stick to the torso section.  I twisted the Tootsie Roll Lollipop stick around a longer popsicle stick and used white floral tape to keep it all held together and secure.  I then covered the entire mid-section with a piece of white gumpaste and built the clothing up over it. 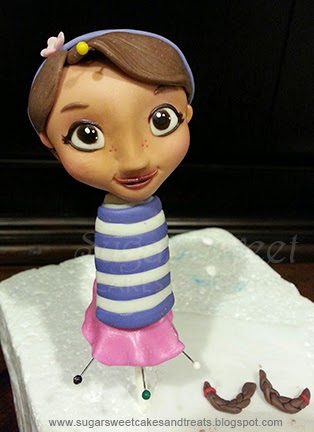 From this stage forward, I forgot to take more photos of the process but hopefully you can see what was done.

We had cupcakes that I frosted with pink buttercream and I added a dash of glitter to make them sparkle.  I also made little pink fondant hearts and added them over some wafer cookies to look like Band-Aids.  The birthday girls mom setup the dessert table with little cups that held pink and white licorice candies that resembled pills and a glass canister that held large marshmallows to resemble cotton balls.  It was a super cute party! 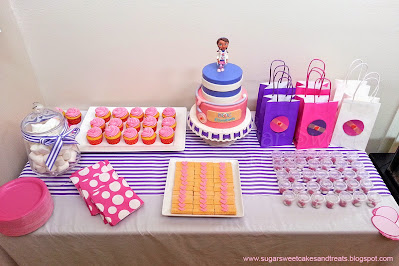 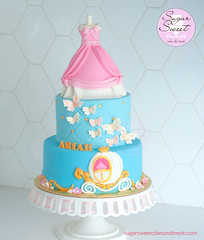